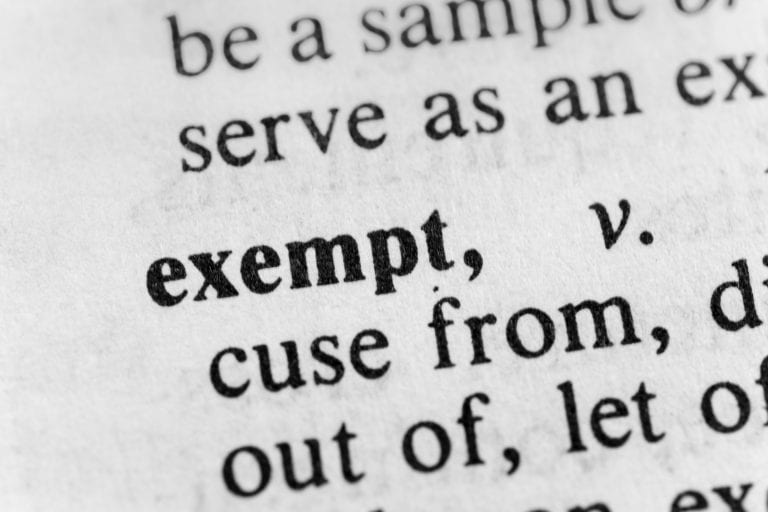 When a debtor files for chapter 7 or chapter 11 bankruptcy, the debtor is entitled to certain bankruptcy exemptions which effect creditor’s rights. The exempt property is shielded from the creditors circling around the debtor’s estate for collection of their outstanding loans. One well-known exemption is the homestead exemption, (recently expanded to provide greater protection to debtors in California), which may allow debtors to transfer exempt property without being subject to fraudulent transfer laws.

There are avenues which will allow a trustee to deny exemptions claimed by the debtor. In addition to these exemption denials, the presiding bankruptcy court may also order otherwise exempt property liable to be used to pay down certain kinds of prepetition debts pursuant to exceptions laid out in 11 U.S.C. § 522.

Moreover, § 522 sets forth a number of carefully calibrated exceptions and limitations, some of which relate to the debtor’s misconduct. For example, § 522(c) makes exempt property liable for certain kinds of prepetition debts, including debts arising from tax fraud, fraud in connection with student loans, and other specified types of wrongdoing. Section 522(o) prevents a debtor from claiming a homestead exemption to the extent he acquired the homestead with nonexempt property in the previous 10 years “with the intent to hinder, delay, or defraud a creditor.” And § 522(q) caps a debtor’s homestead exemption at approximately $150,000 (but does not eliminate it entirely) where the debtor has been convicted of a felony that shows “that the filing of the case was an abuse of the provisions of” the Code, or where the debtor owes a debt arising from specified wrongful acts—such as securities fraud, civil violations of the Racketeer Influenced and Corrupt Organizations Act, or “any criminal act, intentional tort, or willful or reckless misconduct that caused serious physical injury or death to another individual in the preceding 5 years.” § 522(q) and note following § 522. The Code’s meticulous—not to say mind-numbingly detailed—enumeration of exemptions and exceptions to those exemptions confirms that courts are not authorized to create additional exceptions. See Hillman v. Maretta, 133 S.Ct. 1943, 1953, 186 L.Ed.2d 43 (2013); TRW Inc. v. Andrews, 534 U.S. 19, 28–29, 122 S.Ct. 441, 151 L.Ed.2d 339 (2001).

Bankruptcy Rule 1009 allows a debtor to amend its list of exemptions at any time before the case is closed.

There were two universally recognized exceptions to this general rule disallowing a debtor from amending its exemptions when the debtor acted in bad faith and when allowing the amendment would result in prejudice to creditors. Thus, courts would universally deny exemption claims when a debtor had fraudulently concealed assets and engaged in other conduct which resulted in prejudice to the creditors whose rights were affected by the claimed exemption. This universal denial of a debtor’s claimed exemptions was significantly altered by Law v. Siegel, 571 U.S. 415, 424 (2014) .

Law v. Siegel, 571 U.S. 415, 424 (2014) noted, in dicta, beyond these “carefully calibrated exceptions and limitations” within the bankruptcy code limiting the debtor’s ability to exempt certain property from its estate, a Court’s ability to except property from being claimed as an exemption is limited.

Siegel points out that a handful of courts have claimed authority to disallow an exemption (or to bar a debtor from amending his schedules to claim an exemption, which is much the same thing) based on the debtor’s fraudulent concealment of the asset alleged to be exempt. … He suggests that those decisions reflect a general, equitable power in bankruptcy courts to deny exemptions based on a debtor’s bad-faith conduct. For the reasons we have given, the Bankruptcy Code admits no such power. It is of course true that when a debtor claims a state-created exemption, the exemption’s scope is determined by state law, which may provide that certain types of debtor misconduct warrant denial of the exemption. … Some of the early decisions on which Siegel relies, and which the Fifth Circuit cited in Stewart, are instances in which federal courts applied state law to disallow state-created exemptions. … But federal law provides no authority for bankruptcy courts to deny an exemption on a ground not specified in the Code.

Given that the Supreme Court has held that the debtor’s bad faith conduct may not lead to a denial of a claimed exemption amount, it necessarily follows that creditor’s rights will be negatively effected. Indeed, the Supreme Court noted the potential for deleterious effects arising from it’s holding.

We acknowledge that our ruling forces Siegel to shoulder a heavy financial burden resulting from Law’s egregious misconduct, and that it may produce inequitable results for trustees and creditors in other cases. We have recognized, however, that in crafting the provisions of § 522, “Congress balanced the difficult choices that exemption limits impose on debtors with the economic harm that exemptions visit on creditors.” Schwab v. Reilly, 560 U.S. 770, 791, 130 S.Ct. 2652, 177 L.Ed.2d 234 (2010). The same can be said of the limits imposed on recovery of administrative expenses by trustees. For the reasons we have explained, it is not for courts to alter the balance struck by the statute. Cf. Guidry v. Sheet Metal Workers Nat. Pension Fund, 493 U.S. 365, 376–377, 110 S.Ct. 680, 107 L.Ed.2d 782 (1990).

Given these limits on the sitting Court’s ability to protect creditors from a debtor’s bad faith conduct, the question becomes: what is really preventing a debtor from hiding its assets in a bad faith manner? The Supreme Court noted that it believes the sitting court will still be able to sufficiently protect creditors despite its ruling.

Our decision today does not denude bankruptcy courts of the essential “authority to respond to debtor misconduct with meaningful sanctions.” … There is ample authority to deny the dishonest debtor a discharge. See § 727(a)(2)-(6). (That sanction lacks bite here, since by reason of a postpetition settlement between Siegel and Law’s major creditor, Law has no debts left to discharge; but that will not often be the case.) In addition, Federal Rule of Bankruptcy Procedure 9011—bankruptcy’s analogue to Civil Rule 11—authorizes the court to impose sanctions for bad-faith litigation conduct, which may include “an order directing payment … of some or all of the reasonable attorneys’ fees and other expenses incurred as a direct result of the violation.” Fed. Rule Bkrtcy. Proc. 9011(c)(2). The court may also possess further sanctioning authority under either § 105(a) or its inherent powers. Cf. Chambers, 501 U.S., at 45–49, 111 S.Ct. 2123. And because it arises postpetition, a bankruptcy court’s monetary sanction survives the bankruptcy case and is thereafter enforceable through the normal procedures for collecting money judgments. See § 727(b). Fraudulent conduct in a bankruptcy case may also subject a debtor to criminal prosecution under 18 U.S.C. § 152, which carries a maximum penalty of five years’ imprisonment.

But whatever other sanctions a bankruptcy court may impose on a dishonest debtor, it may not contravene express provisions of the Bankruptcy Code by ordering that the debtor’s exempt property be used to pay debts and expenses for which that property is not liable under the Code.

Recently, courts have grappled with the issue of whether they are bound by the dicta in Law disallowing a bankruptcy court to abrogate a debtor’s exemption claim based on the bad faith conduct of the debtor.

A bankruptcy court has no authority under federal law to deny a debtor’s claim of exemptions on a ground that is not specified in the bankruptcy code.

Application of Siegel, therefore, requires this Court allow the Amendment Motion, as the Court is limited in its authority to deny the Debtor leave to amend his exemptions whether there was bad faith conduct or not.

Furthermore, to apply Siegel to this situation could arguably act as an open invitation for debtors to commit fraud in claiming exemptions, knowing that the Bankruptcy Court would be powerless to deny such. As a matter of policy, this is not only inappropriate, but for no apparent reason differentiates this particular situation from the other fraud inquiries under the Bankruptcy Code, which historically at least are unquestionably within the authority of the Bankruptcy Court to adjudicate. That, coupled with the very basic need for the Bankruptcy Court to maintain and enforce the integrity of the entire system, require that at the very least eliminating the authority of that Court to deal with fraud in this situation should either be as a result of (a) a clear statutory enactment or (b) specific binding decisional authority in a substantively analogous case, as opposed to the application of what needs to be seen as dictum and otherwise unwarranted.

We therefore reject the trustee’s artificial delineation and hold that, under Siegel, bankruptcy courts o not have the authority to use their equitable powers to disallow exemptions or amendments to exemptions due to bad faith or misconduct.

As such, the law is seemingly well settled that a debtor’s bad faith or misconduct may not be used to deny an exemption claimed by the debtor, even if doing so would result in an expense or unjust result for the creditors.

Given that creditor’s rights are negatively affected by the foregoing, it would benefit any party negatively influenced by a debtor’s bad faith conduct to contact an experienced bankruptcy attorney to figure out what other means may be available to protect their rights. Talkov Law can be reached at p(844) 4-TALKOV (825568) or contact us online.