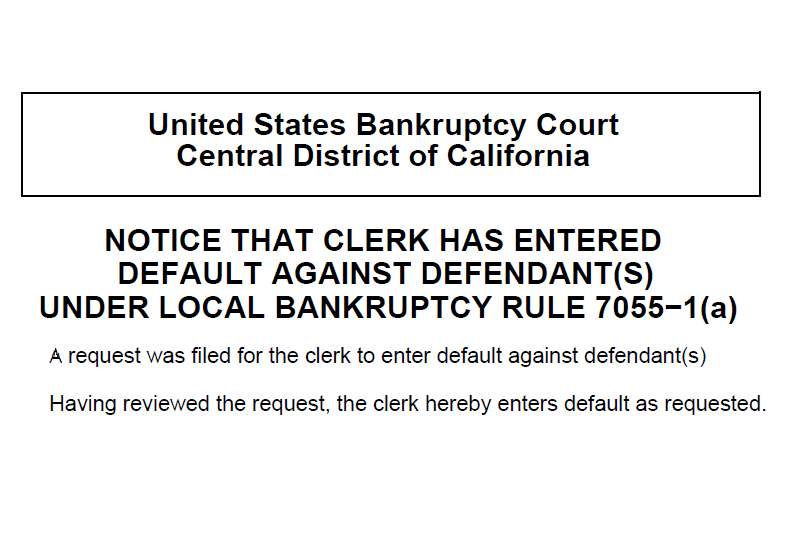 Contents hide
How to File a Motion to Set Aside Clerk’s Entry of Default & Default Judgment in Bankruptcy Court (California, Ninth Circuit)
The Standards for Service of Process in Bankruptcy Court are Very Low
Motion to Set Aside Entry of Default in a Bankruptcy Adversary – Form
I. INTRODUCTION
II. GOOD CAUSE EXISTS TO SET ASIDE THE ENTRY OF DEFAULT [AND DEFAULT JUDGMENT]
A. Mistaken Belief that Counsel Would be Preparing a Response is Sufficient to Set Aside the Default
B. Alternatively, Excusable Neglect Also Allows the Default to be Set Aside
C. Defendant Will Present a Meritorious Defense to All Causes of Action in the Complaint
D. [OPTIONAL: The Plaintiff Failed to Serve Defendant as Required by Law]
II. CONCLUSION
III. DECLARATION OF [NAME OF DEFENDANT]

How to File a Motion to Set Aside Clerk’s Entry of Default & Default Judgment in Bankruptcy Court (California, Ninth Circuit)

Bankruptcy creditors, trustees and interested parties regularly file adversary complaints in bankruptcy cases in California and throughout the Ninth Circuit. Below you will find some of tips from a bankruptcy lawyer to set aside the default and a draft motion to be filed with the court to see that the entry of a default is set aside. It is important to act promptly as the entry of default is a precursor to a request for a default judgment where the court may give the plaintiff everything they are asking for by way of a judgment that can follow you for years or even decades.

Unfortunately for defendants in an adversary proceeding, who are most commonly the debtor in a Chapter 7 bankruptcy and sometimes in Chapters 11 and 13, the standard for service on a defendant in an adversary proceeding is much lower than it would be in state court. In state court, a process server would normally come to your door and make sure you or an adult at your house or place of business was handed the summons and complaint.

Rather, in bankruptcy, the operative rule for service of the debtor found in Federal Rules of Bankruptcy Procedure, Rule 7004(b)(9) provides merely that, where service is to be made “Upon the debtor,” service is made “by mailing a copy of the summons and complaint to the debtor at the address shown in the petition or to such other address as the debtor may designate in a filed writing.”

Often times, mail is not properly delivered, sent to an address where the debtor it not present, or is simply tossed in the trash on accident. What results is that the court believes the defendant has notice of the proceeding and effectively consents to whatever the plaintiff is asking that the court will allow, including in non-dischargeability cases.

Below is a form that is intended to be used in consultation with a bankruptcy attorney to set aside entry of default. Note that a creditor can consent to setting aside entry of a default, but often will not do so unless there is a compelling reason to do so, which is why it is important to consult with a skilled adversary lawyer to strategize in these situations. Before filing, be sure to check the Local Bankruptcy Rules and this guide on how to file a motion to set aside a default provided by Public Counsel.

[Name or Name and Bar Number]

TO THE HONORABLE [NAME OF JUDGE], UNITED STATES BANKRUPTCY JUDGE, THE OFFICE OF THE UNITED STATE TRUSTEE, AND ALL OTHER INTERESTED PARTIES:

By way of this motion, defendant asks to set aside the entry of default under FRCP 55(c) in that the complaint and summons [were not served on the defendant as required by law or were served, but the Defendant failed to respond due to mistake, inadvertence, and/or excusable neglect].

Here, [provide brief summary of the reason why the defendant did not appear in the bankruptcy court after being served, or explain any facts showing that the defendant was not served, for example because the plaintiff used an incorrect address.]

II.          GOOD CAUSE EXISTS TO SET ASIDE THE ENTRY OF DEFAULT [AND DEFAULT JUDGMENT]

“These factors are ‘disjunctive’—i.e., a finding that any one of them is true is sufficient reason for the court to refuse to vacate the default. On motion and just terms, the court may relieve a part or its legal representative from a final judgement, order, or proceeding for mistake, inadvertence, surprise, or excusable neglect. Federal Rules of Civil Procedure Rule 60(a)(1).” Setting Aside a Default or Default Judgment, Rutter Group Prac. Guide Fed. Civ. Pro. Before Trial Ch. 6-E (citing United States v. Aguilar, 782 F.3d 1101, 1105 (9th Cir. 2015)).

“‘Judgment by default is a drastic step appropriate only in extreme circumstances; a case should, whenever possible, be decided on the merits.’ Falk v. Allen, 739 F.2d 461, 463 (9th Cir. 1984). Our rules for determining when a default should be set aside are solicitous towards movants, especially those whose actions leading to the default were taken without the benefit of legal representation.” United States v. Signed Pers. Check No. 730 of Yubran S. Mesle, 615 F.3d 1085, 1089 (9th Cir. 2010).

“Excusable neglect is an equitable concept that takes account of factors such as ‘prejudice, the length of the delay and impact on judicial proceedings, the reason for the delay, including whether it was within the reasonable control of the movant, and whether the movant acted in good faith.’” Franchise Holding II, LLC. v. Huntington Restaurants Grp., Inc., 375 F.3d 922, 927 (9th Cir. 2004).

As explained below, the reasonable excuse is that the plaintiff[s] [did not served the defendant in the manner required by FRBP 7004(b)(9), the defendant believed an attorney was preparing a response, or the defendant did not receive the notice in the mail, or any other excuse.]

A.    Mistaken Belief that Counsel Would be Preparing a Response is Sufficient to Set Aside the Default

“The mistake of fact must be reasonable under the circumstances. This usually turns on the justifiability of defendant’s failure to ascertain the correct facts. Relief will not be granted where the failure to respond reflects the conscious desire to avoid defending the suit.” Setting Aside a Default or Default Judgment, Rutter Group Prac. Guide Fed. Civ. Pro. Before Trial Ch. 6-E, 6:158.

This Court is empowered to set aside the default solely on the basis of mistake. Defendant’s prompt action means that the default can and should be set aside to allow this matter to be decided on the merits.

B.    Alternatively, Excusable Neglect Also Allows the Default to be Set Aside

Under Rule 60(b)(1), a court may set aside a default judgment for “excusable neglect.” “[T]he three disjunctive factors used to determine if ‘excusable neglect’ could permit setting aside the [a defendant’s] default [are]: (1) whether the party seeking to set aside the default engaged in culpable conduct that led to the default; (2) whether it had no meritorious defense; or (3) whether reopening the default judgment would prejudice the other party.” United States v. Aguilar, 782 F.3d 1101, 1105 (9th Cir. 2015).

Here, first, the party seeking to set aside the default did not engage in culpable conduct that led to the default. Rather, the declaration of the defendant sets forth that the defendant [provided any facts supporting this defense].

Second, the defendant has numerous meritorious defenses, as set forth in the heading below.

This Court is empowered to hear this adversary on the merits. Defendant respectfully requests that this Court set aside the default.

C.    Defendant Will Present a Meritorious Defense to All Causes of Action in the Complaint

Explained below are the meritorious defenses as relevant to setting aside the default.

There appear to be numerous defenses, both factual and legal, in this case. Accordingly, Defendant respectfully requests that the entry of default and any forthcoming default judgment be set aside.

D.    [OPTIONAL: The Plaintiff Failed to Serve Defendant as Required by Law]

[Optional: If there was a defect in service that appears on the proof of service, such as mailing to the wrong address, use the information below.]

Under Federal Rules of Bankruptcy Procedure, Rule 7012(b): “Rule 12(b)–(i) F.R.Civ.P. applies in adversary proceedings.” In turn, under Federal Rules of Civil Procedure, Rule 12(b)(5), “a party may assert the following defenses by motion…insufficient service of process.” As it relates to service of process, FRBP 7004(a)(1) provides that “Rule 4…(m) F.R.Civ.P. applies in adversary proceedings.”

In turn Federal Rules of Bankruptcy Procedure, Rule 7004(b)(9) provides that, where service is to be made “Upon the debtor,” service is made “by mailing a copy of the summons and complaint to the debtor at the address shown in the petition or to such other address as the debtor may designate in a filed writing.”

As Rutter explains: “When service of process is properly challenged, the party on whose behalf service was made (plaintiff) has the burden to establish its validity. [See Mann v. Castiel (DC Cir. 2012) 681 F3d 368, 373].” Challenging Defective Service, Rutter Group Prac. Guide Fed. Civ. Pro. Before Trial Ch. 5-I, 5:348. When “the defect in service is established on the face of the return,” no further evidence is required by the defendant to establish the defect. Id. at 5:350 (citing In re Med-Atlantic Petroleum Corp.,  233 BR 644, 662 (BC SD NY 1999); Vázquez-Robles v. CommoLoCo, Inc.,  757 F3d 1, 8 (1st Cir. 2014) —defendant’s documentary evidence established “beyond hope of contradiction” that plaintiff’s attempted service “was insufficient to hale the defendant into court”).

In this case, service was not sent to the address shown on the petition.

As a court in the Central District of California explained, “frankly, a bankruptcy attorney should readily know how to serve in accordance with FRBP 7004. Since the information required to satisfy FRBP 7004(b)(9) was readily available, compliance was a simple task… The unintentional failure to comply alone is not a good enough excuse for this court to ignore plaintiffs’ lack of compliance with FRBP 7004.” In re Bloomingdale, 137 B.R. 351, 354–55 (Bankr. C.D. Cal. 1991). The court found that, “[w]hen service is not made within the [90]–day period and no good cause is demonstrated for the failure to comply, the complaint should be dismissed. Since plaintiffs failed to serve debtor properly within the [90]–day period and no good cause was shown, the complaint is dismissed.”

Defendant respectfully requests that this Court set aside

[End of optional section on defect in service]

For the reasons set forth above, Defendant respectfully requests that this Court set aside the entry of default and, if necessary, set aside any default judgment under FRCP 55(c) and 60(b)(1).

I, [Name of Defendant], declare:

I declare under penalty of perjury under the laws of the United States that the foregoing is true and correct.

Executed this [Date] at [City Where Defendant Lives], California.

As a courtesy, we are providing this motion in Microsoft Word format for use only in consultation with or when represented by an attorney. Click here for a Word format of this motion.

Notice: Please contact an attorney to advise you of your rights upon an assessment of the facts in your case before using this template because the ramifications can be significant and long term if you are unsuccessful in setting aside a default. Talkov Law’s bankruptcy attorneys can be reached online or by phone at (844) 4-TALKOV (825568)