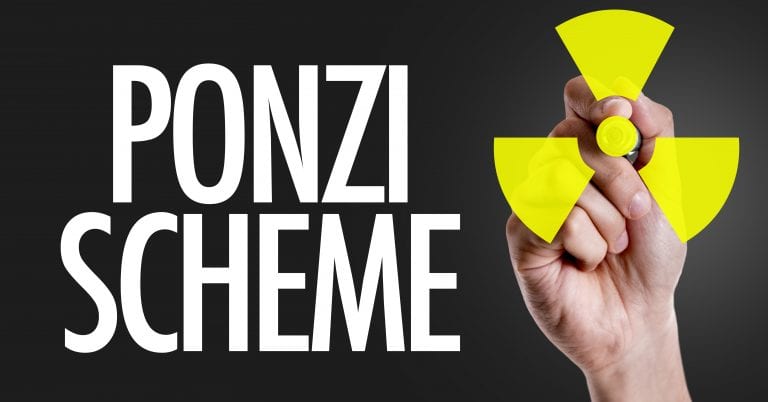 Fraudulent transfers are one type of adversary proceeding in bankruptcy in which the trustee attempts to recover property for the benefit of the creditors of the debtor’s estate. A full discussion on fraudulent transfer actions can be found on our blog post on Fraudulent Transfers in Bankruptcy.

In addition to fraudulent transfers, preference actions are another form of adversary proceeding brought by the trustee for the benefit of the creditors in bankruptcy. As an aside, ordinary course of business transfers and contemporaneous exchange of new value are the two most heavily litigated defenses to a preference action.

What is a Ponzi Scheme?

Given the effects that the presence of a Ponzi scheme may have on the defenses available to a defendant in a fraudulent transfer action, the question becomes: what is a Ponzi scheme anyway?

The bankruptcy appellate panel of the ninth circuit recently weighed in on the issue, noting:

A Ponzi scheme is a fraudulent arrangement in which an entity makes payments to investors from monies obtained from later investors rather than from any ‘profits’ of the underlying business venture. The fraud consists of funneling proceeds received from new investors to previous investors in the guise of profits from the alleged business venture, thereby cultivating an illusion that a legitimate profit-making business opportunity exists and inducing further investment.

With this understanding of the meaning of a Ponzi scheme, the special considerations which apply when a fraudulent transfer action in the context of a Ponzi scheme bankruptcy proceeding are more easily understood.

Step One – The “Netting Rule”

Amounts transferred by the Ponzi scheme perpetrator to the investor are netted against the initial amounts invested by that individual. If the net is positive, the receiver has established liability, and the court then determines the actual amount of liability, which may or may not be equal to the net gain, depending on factors such as whether transfers were made within the limitations period or whether the investor lacked good faith. If the net is negative, the good faith investor is not liable because payments received in amounts less than the initial investment, being payments against the good faith investor’s as-yet unsatisfied restitution claim against the Ponzi scheme perpetrator, are not avoidable within the meaning of the UFTA.

Next, the court must determine the amount of a defendant’s liability to return a fraudulent transfer received from a Ponzi scheme operator:

While the ‘profits’ made by investors may be able to be clawed back from a trustee in a fraudulent transfer action in the Ponzi scheme context, the applicable statute of limitations will still apply.

Although all payments of fictitious profits are avoidable as fraudulent transfers, the appropriate statute of limitations restricts the payments the Ponzi scheme investor may be required to disgorge. Only transfers made within the limitations period are avoidable. … Neilson v. Union Bank of Cal., N.A., 290 F.Supp.2d 1101, 1145-46 (holding that plaintiffs could prevail if they could prove at the trial that certain transfers made pursuant to a Ponzi scheme were made within the limitations period of California’s UFTA).

Donnell, supra, 533 F.3d at 772. The statute of limitations laid out in the United States Bankruptcy Code § 548 is two years before the filing of the petition. If a fraudulent transfer action is being brought pursuant to the California Uniform Voidable Transfer Act, the statute of limitations typically requires an action to be brought within four years of the transfer.

Thus, step one nets the amount of the initial investment against the amount transferred to the fraudulent transfer defendant from the Ponzi scheme operator debtor. Step two requires an analysis of how much is recoverable over and above the initial investment made by the defendant. Then, the applicable statute of limitations may serve to reduce the amount of recovery a trustee may have from a Ponzi scheme investor, even if the investor got more money out of the scheme than they initially invested.

In the context of a Ponzi scheme, whether the receiver seeks to recover from winning investors under the actual fraud or constructive fraud theories generally does not impact the amount of recovery from innocent investors.

Good-Faith or Innocent Investors in a Ponzi Scheme

“[G]ood faith ‘is not susceptible of precise definition.'” In re Agricultural Research and Tech. Grp., Inc., 916 F.2d 528, 536 (9th Cir. 1990). Once court has gone so far as to pronounce that a lack of good faith is demonstrated simply by a transferee who knows that a debtor is operating a Ponzi scheme. In re Indep. Clearing House Co., 77 B.R. 843, 861 (D. Utah 1987). An early Supreme Court case stated that bad faith may be inferred if: “knowledge or actual notice of circumstances sufficient to put him, as a prudent man, upon inquiry as to whether [a debtor] intended to delay or defraud his creditors.” Shauer v Alterton, 151 U.S. 607, 621 (1894). Thus, Courts seemingly look to whether “the transferee objectively ‘knew or should have known’ in questions of good faith….” In re Agricultural Research and Tech. Grp., Inc., supra, 916 F.2d at 535-36.

In the presence of a bad faith investor who commits actual fraud when putting money into a Ponzi scheme, “the receiver may recover the entire amount paid to an investor, including amounts which could be considered ‘return of principal.'” Donnell, supra, 533 F.3d at 771. However, there is a good faith defense which permits an innocent winning investor to retain the full amount of its initial principal investment. In re Agricultural Research and Tech. Grp., Inc., supra, 916 F.2d at 535.

Similar to the actual fraud theory of recovery Ponzi scheme context, if the investor acts in good faith, then the trustee may only recover the ‘profits’ derived from a Ponzi scheme over and above the initial investment. Scholes v. Lehmann, 56 F.3d 750, 757 (7th Cir. 1995). However, unlike a recovery action under actual fraud, the trustee (not the investor defendant) bears the burden of proving bad faith on the part of the investor defendant in the case of recovery under a constructive fraud theory in the context of a Ponzi scheme. Id. at 756-57.

Fraudulent transfer adversary proceedings, especially in the context of a Ponzi scheme, are very complex. As such, if a trustee has filed or may file an adversary proceeding against you alleging a fraudulent transfer, it is important to contact a skilled bankruptcy attorneys immediately. Talkov Law’s experienced bankruptcy attorneys can help determine what defenses may be available to you by working with you online or over the phone at (844) 4-TALKOV (825568)